Since I came into contact with India, a new world opened up to me and I began to approach the Eastern philosophical thought, especially the Buddhist and Hindu thought, and so I tried different types of yoga, types of meditation, Ayurvedic practices, etc. Traveling and living in Asia it is customary to hear about yoga, meditation, spirituality, and of course Vipassana, especially if you travel between India and Nepal.

Vipassana meditation is a meditation that lasts 10 days, the time during which silence must be kept, one can not read, write, but only meditate, meditate and meditate. It intrigued me from the beginning, like all that is new, and that concerns the search for emotional well-being and serenity of the soul. But the aspect that struck me most was the silence.

Moreover, I had read a lot on the subject, even on Terzani’s books. I had talked about this experience to most of the people I had met in the previous months, some of them had already meditated and told me their impressions/revelations, while others, completely in the dark, had promised that I would tell about my experience.

I had promised myself that I would not return to Europe without first taking a course of Vipassana, as I had also promised myself that I would do this by myself. On this point, in reality, things have gone very differently, because I found myself walking through the gates of the Dhamma center with a French boy I knew weeks before in India. Life at heart teaches us that events and meetings are not predictable and that instead, they happen for a reason. That meeting made me happy just when I needed it most, and I was so grateful to the life that that person came into my life; however, has informed me a lot and knowing the different rules to be respected, I knew that undertaking this path would have been even harder for me. At the same time, however, I was relieved that I would not have to face all that alone. I do not deny that he was really upset because I did not know what to expect, from the situation, but above all from myself. I still remember when we checked in, left our luggage and prepared our beds (really basic), we moved away from the structure for the last moments of freedom, we chatted and we hugged for the last time, aware that from in 10 days we would have to ignore, yes, because if someone had noticed strange behavior we would have been kicked out both. Moreover, in the moments of waiting that first day, all of us pupils started to make friends, laugh and joke, and even then, we knew that from there to a few hours we would barely see each other again.

I realized shortly thereafter that the spaces between men and women were symmetrically divided and that we would not meet even for meals. The only time when men and women entering from different sides would be in the same place, would be during group meditations and during Goenka’s lessons in the video room, the only time we could watch a screen and we were more relaxed it was during the lessons of our spiritual guru/teacher Goenka; to say that his lessons have been enlightening is completely reductive.

But what were the biggest difficulties to overcome? Different and in some moments, especially the first days I asked myself to do it there.

*Keeping yourself light is one of the prerogatives when practicing yoga and meditation, but more generally of all Eastern philosophical practices. Keep our body light and feed it with healthy meals, to be cleaned inside and out. Moreover, in countries like India and Nepal, where culture is immersed in yoga and meditation is common to be vegetarian and vegan to keep the body clean and pure.

Participating in this meditation means embarking on a journey within one’s own soul and soul.

We find ourselves crying without knowing why or to smile, it is a whirlwind of emotions, also because they are faced with their own that is laid bare by themselves, I have understood many things about myself that I want to treasure.

The silence was one of the things that I appreciated most, and of which I have benefited most. The favorite moments of the day were the sunset and the evening. In those moments I loved walking with my thoughts and dwelling on the flowers, plants, and insects that surrounded me and in the evening the thing that I liked most was to look at the sky, the stars and the moon, listen to the sounds of nature typical of evenings in summer (despite being the month of March) and just in one of these walks in the dark I expected to see almost always in the same spot a firefly, with the same joy and curiosity of a child, it is said at the bottom that happiness is in the little things. Here, this concept seemed apt, and it was curious to note that people like me who stopped to watch the ants, the flowers or had noticed that little firefly, were those with which there was more harmony!

A moment full of energy was when we broke the silence, see before you those people before so very serious now as free from something, serene, happy, smiling, the break of silence and the end of the course was an explosion of joy and gratitude for the lived experience and the path taken. I wondered if others saw the same things I saw in them

It took me a while to start talking and I felt that the silence was already missing me .. We are no longer used to silence, listening to ourselves and the sounds that surround us, we live in a society that is always moving away more from nature, from things that really matter in life. That day, I did not even know how I would react to see that French boy, who had missed me so much, but it was wonderful to remember that we had done something big and important for ourselves. That the challenge that so hard had put us to the test had been successfully overcome. And it was nice to be surrounded by general enthusiasm.

It was not easy to return to life outside the center, I still remember when we left the gates, we seemed lost, but above all, we realized how tired we were.

When we decided to visit the temples of Lumbini the first thing we did is close our eyes and listen, we were in the temple dedicated to Buddha, and in front of us, there were some beautiful trees, with hanging lots of Tibetan flags fluttering in the wind, a group of Tibetan monks who prayed and some faithful who sang religious songs, in a unique atmosphere. There was no better place for peace than we felt inside. Shortly after lying down on the lawn, we closed our eyes to hear once again the silence, the almost imperceptible sound of the insects that fluttered around us, those little things, which in reality have such a great value for us.

That evening, of that long day that will remain imprinted in our lives, we found ourselves in the best restaurant in Lumbini, we, that large group of people, coming from different parts of the world, each with their own story, talking, laughing and joking of the experience just lived, of travel, of life.

I miss that peace, of course, there is no need to go to Nepal or to take a course of Vipassana for this, it would be enough, find a place where you can be silent, surrounded by nature and without light pollution. But the fact of finding myself in Nepal, in Lumbini, in the place where Buddha was born, doing meditation has made those feelings even more unique and unrepeatable.

That atmosphere, those feelings I miss, I miss that me, so intent on finding inner peace or at least commit to undertake that path … Here, in the reality in which I find myself now it is difficult to continue to have that spirit.

But there are many things I learned about life, myself and my mind. Goenka’s lessons were illuminating, and the various meditation steps showed me how strong and powerful the mind could be and it was nice to talk about love towards oneself, towards others, about emotional well-being, about the struggle between good and evil, of harmony with nature, topics that in general in our Western society we never talk about.

This does not mean that I have been transformed into a different person, meditation, especially Vipassana, must be practiced continuously in order to get closer and closer to nirvana, but it certainly means to be changed, and to have changed the way you deal with and perceive situations, the life. But it is also true that as you travel, especially on your own, it changes you, approaching spirituality and Eastern philosophy changes yourself and your approach to life. 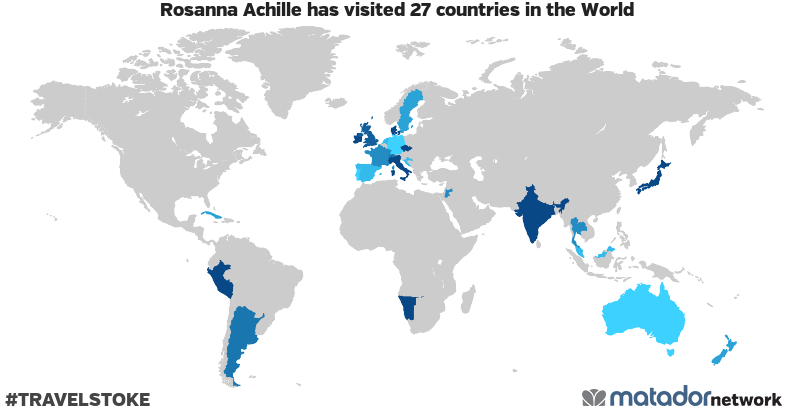